These rice balls (onigiri) are filled with chicken seasoned with turmeric and mayo, then toasted crispy in a pan.

Usually chicken is a hit or miss with Munchkin (and with many toddlers). I believe it’s the texture of chicken that throws her off sometimes. This turmeric mayo chicken paste is soft and creamy making it toddler-friendly. I also sneaked in some zucchini.😉 Munchkin loves the filling and would eat a bowl of it straight with a spoon. Ok, I am not a master of making rice balls. I used to pick them up, ready-to-eat, at a convenience store while growing up. So when I was trying to make perfectly round balls with the filling completely wrapped in the rice, I got frustrated pretty fast. I almost gave in and thought of just giving a bowl of chicken along with a bowl of rice.

But the vision of cute rice balls, toasted, sitting in a lovely lunchbox lined with a beautiful green leaf got me going. Eventually, I found a solution. I took out the rice ball mold from the cabinet and made a sort of a sandwich instead. Traditionally, fillings are entirely covered with rice, but I would end up with too much rice and a little chicken this way. And most of the flavor and the nutrition is in the chicken here. So I tried to pack in as much filling as I could. It was so much easier to make it this way too.

You need short grain sticky rice such as Japanese sushi rice to get the balls in shape. I used Korean “sweet rice” also called “glutinous rice.” It’s actually not sweet but has a very sticky texture, not quite fluffy as sushi rice. But that was ok because I was going to toast the rice until golden and crispy. I think the crispiness gave a nice contrast to the soft filling. (You can refrigerate the rice balls right before toasting them. Crisp them up when you are ready to eat.)

Putting them in a lunchbox

Putting in the lunchbox was my favorite part as the inspiration for this recipe came from an image of rice balls sitting on a green leaf. I used a pumpkin leaf, but any green leaf would work. To add a color contrast, I filled the rest of the lunchbox with pomegranate seeds. Between, munchkin loved the pomegranate seeds so much that I gave an extra serving for dinner too. If you enjoyed this recipe also check out my tomato-y chicken recipe.

: I’m in love with the simple, sleek design of this lunch box.
Inomata Triangle Sushi Mold

: This is not the brand I used, but you can find a similar one through this link. 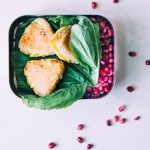 These rice balls (onigiri) are filled with chicken & zucchini seasoned with turmeric and mayo, then toasted crispy in a pan. Turmeric mayo chicken paste is soft and creamy making it toddler-friendly.

Previous Post: « blissful veggie bibimbap & how to make it exciting for your toddler
Next Post: Fennel fruit salad and how to make it toddler-approved »